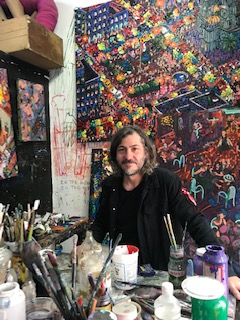 The work of Óscar Basulto Ordóñez was born of chance, family tradition and rebelliousness established in silence. His father, artist Gonzalo Basulto de Alba, was his first teacher, and he also studied at the architecture in his home, Guadalajara. His paintings do not have specific technique but are his personal refuge…a narrative of the unspoken…an alternative history. Colorful desert landscapes where the silence of nature is deafening both oppose and complement boisterous scenes of societal and political machinations. Far from concrete copies of the surrounding world, they are subjective reinterpretations giving depth and new perspectives to the taciturn actors of everyday life moving between introspection and social criticism - a bridge between the spoken and the unspeakable.

Since 1999 he has made more than 20 individual exhibitions and has participated in several national and international group exhibitions afar field as Hamburg, Germany. In 2015 he created the graphic workshop Rio Tomatlán for the development of social and journalistic art.